Admiralty MRT station is an above-ground Mass mass rapid transit station on the North South Line in Woodlands, Singapore. This station took its name from a former British naval base settled on the northern coast of Singapore.

Following various incidents of commuters falling on the tracks and unauthorized intrusions, the Land Transport Authority created the choice in 2008 to install  half-height platform screen doors for all above-ground stations in phases. Installation started on 4 October 2011 and commenced operations since 22 December 2011 with Marsiling.

The station is provided with high-volume low-speed fans that commenced operations on 9 November 2012 together with Sembawang. Cash top-ups at each self-service ticketing machines and passenger service centres won’t be accepted at this station from 13 June 2018. 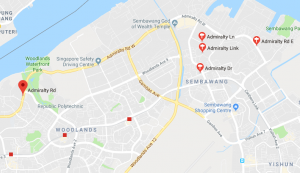